This book was owned and used by Simon H. Ottenhausen. He was a Lieutenant and later a Captain of Company L of the Illinois National Guard who were attached to the 6th Infantry and sent to Cuba in July of 1898 and later to Puerto Rico.
In the photo, hes one of the Jr. officers at the back of the formation. 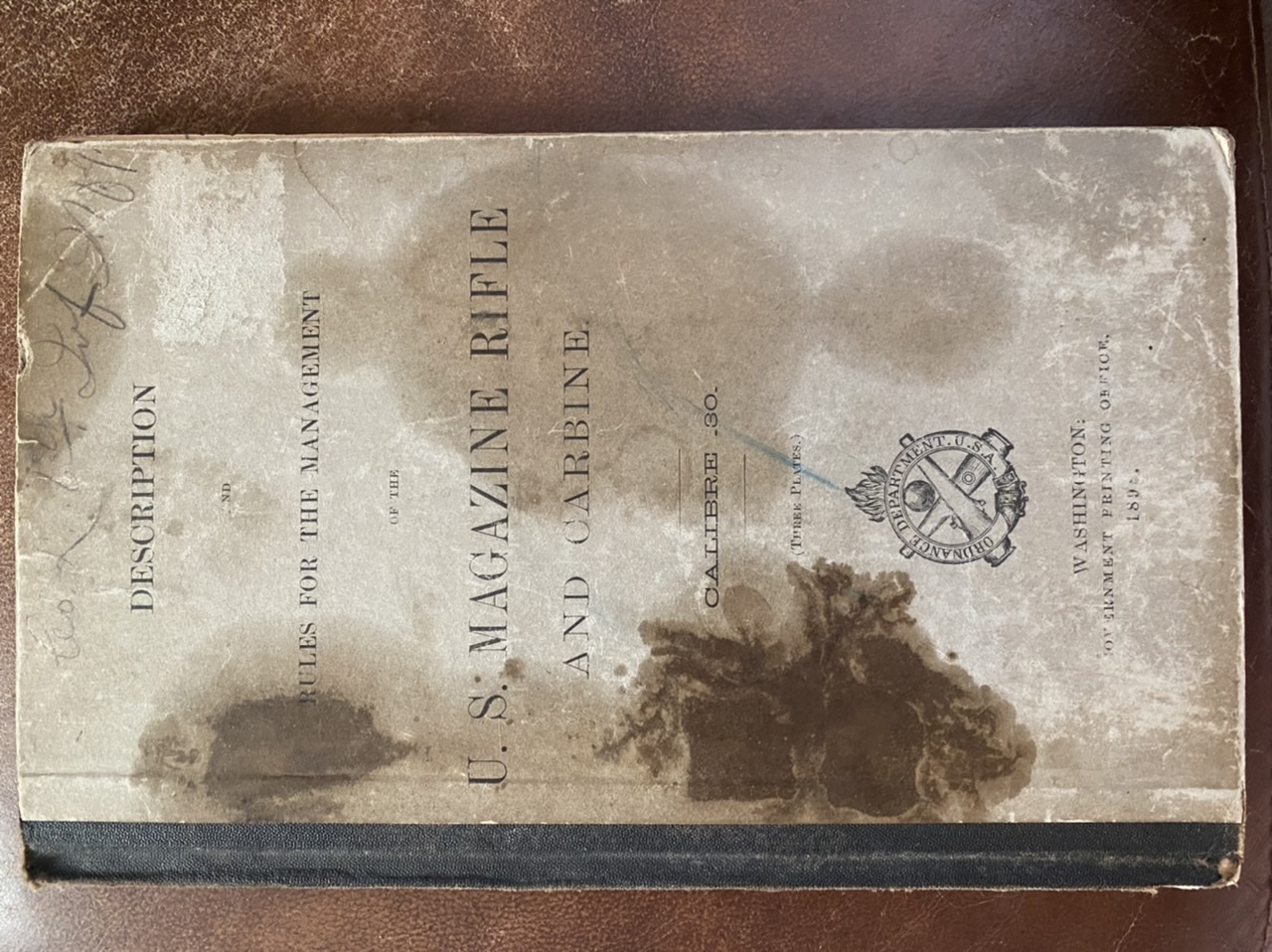 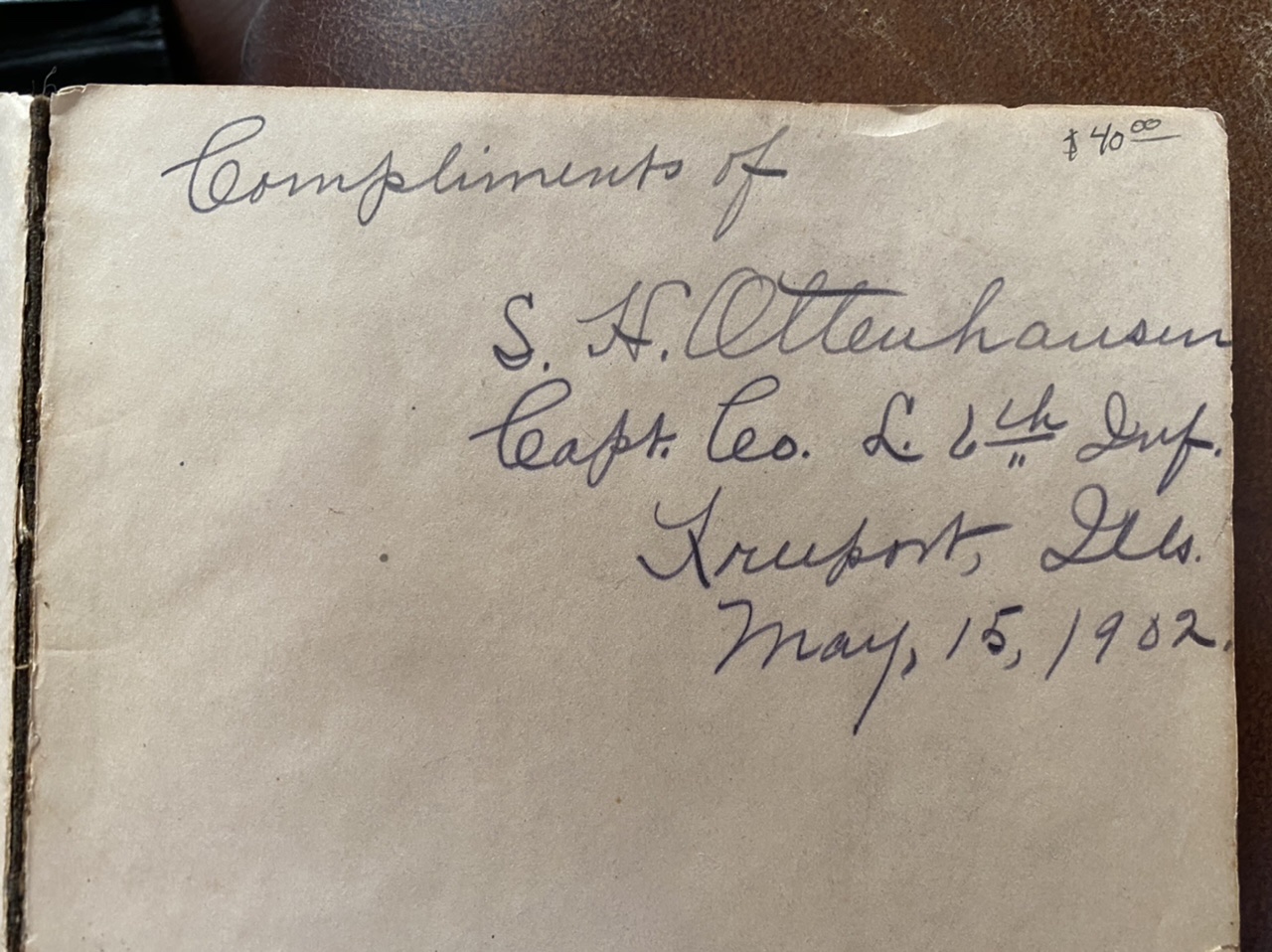 Here is an obituary for him:
SIMON H. OTTENHAUSEN
Stricken while at his desk in the W. T. Rawleigh company plant yesterday afternoon, Simon H. Ottenhausen, 68, a Spanish American war veteran and a lifelong resident of Freeport, died suddenly about 3:30 o'clock. Mr. Ottenhausen, who was a foreman at the Rawleigh plant was found seated in a chair by fellow workers. He had been connected with the company for the past forty years. He resided at 715 West Avon street. Funeral services will be held at the Walker mortuary, West Main street, at 2 o'clock Monday afternoon. Dr. Edwin A. Arends pastor of St. John's Evangelical and Reformed church, will conduct the services and interment will be made in City cemetery. The U.S.W.V. will conduct services at the grave. Friends may call at the mortuary. Mr. Ottenhausen was born in Freeport May 2, 1873, the son of Mr. and Mrs. August Ottenhausen. He was educated in Freeport schools and was united in marriage in 1896 to Miss Anna Hauth, who survives. He also leaves one daughter, Mrs. Ray Harkness, Shirland, Ill. There is also one grandson. Four sisters and three brothers survive, Mrs. August Schmidt, Mrs. Robert Moore, Mrs. Otto Heusing, Mrs. Arthur Landgraf, Fred, Henry and George Ottenhausen, all of Freeport. He was a member of the old Company L. I.N.G., and served in the Spanish American war with that company being a first lieutenant. He was a member of the company for many years and took an active interest in the affairs of that organization. He was affiliated with Albert E. Schmidt camp No. 4, U. S. W. V. [Contributed by Karen Fyock - November 29, 1941 clipping]
Top

Here is a picture of Simon Ottenhausen's grave sight. Just curious where the book was obtained and if the picture was in it. 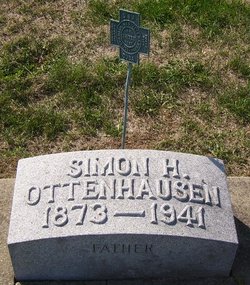 Thank you for all the Great information!
I found the book on eBay and I found the picture on line.
There seems to be a lot more on line about his unit and himself.
Top

The books front cover seems to have had oil soaked into it.
Probably occurred during a rifle cleaning.
Top

Nice piece of Krag history, Fred. Thanks for sharing.
Top

Oh, thank you! Ive had it awhile but only just now looked the mans name up.
If anyone has anything neat to trade for it, I can find another such book to keep.
Just thinking here.
Top
Post Reply
27 posts