Dedicated to the continuing study, collecting, and preservation of the Krag Rifle.
http://schlafe.com/

by Bill77
One of the things that I particularly enjoy about collecting old/military firearms is to make sure that I have those that help tell a story, or the history of other rifles in my collection. A "last ditch" Type 99 Arisaka or a Kriegsmodell Mauser go very well with earlier T99's or 98K's. It shows a timeline of WW2 from when the getting was good to when things were more dire. My collection standards aren't nearly as rigid as the standards of others, simply because I'm ok with a nice representative examples more than I am a museum piece. I usually can find them for a good bit cheaper than those with actual history and I can shoot them as much as I want. A good example is how when you go to the CMP stores, everybody is looking for something from WW2 when in reality, the 1950's rifles are usually in nicer condition and more correct since they haven't been through nearly as many depot rebuilds. Anyway, so back to the topic at hand......

Now that I am a recent US Krag owner, I've given some thought to the idea that you can't really tell the story of the US Krag without the 1893 Spanish Mauser, just as you can't really tell the story of the 1903 Springfield without a US Krag variant. To think that we fought a war that we won pretty handily and noted that the rifles that the enemy had was a significant improvement over what we carried into battle. Not only was the rifle easier and faster to load, but there was nearly a 25% ballistic advantage over the ammunition that we were using in our own rifles. I set about finding a good example that I could break out and shoot from time to time and ended up picking the below rifle up off of Gunbroker. The pictures that the previous owner took and the description provided were less than stellar, but the opening bid (which I won it for) was pretty righteous and I thought that I would take a chance with it. I was actually very pleased with what I received. It's always nice when something arrives and is in better condition than you thought.

The rifle was manufactured in Spain at the government arsenal in Oviedo in 1928 and there are no import marks. Nope, this wasn't used in the Spanish-American war, so I suppose there's the possibility of it being used in the Spanish Civil War, if it saw combat at all. There were very few, if any, changes made to the design up until this point, so it does make a nice example. All of the numbers are matching to include the stock and handguard, with the exception of the bolt. The Spanish Military frequently stored bolts separately from the rifles in the armories, so it's a rare bird if you were to get a rifle where the bolt matches everything else. I'm not sure what stained the wood on the left side of the stock, but something obviously did. The rifle is a real pleasant shooter with mild recoil and is considerably easier to load quickly than the Krag. 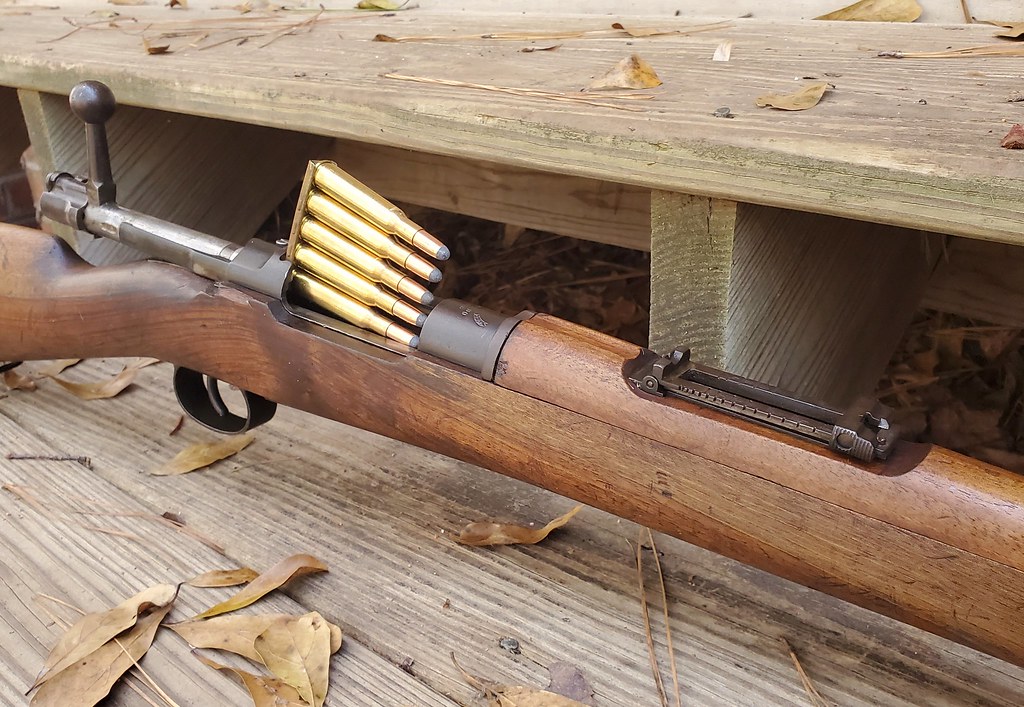 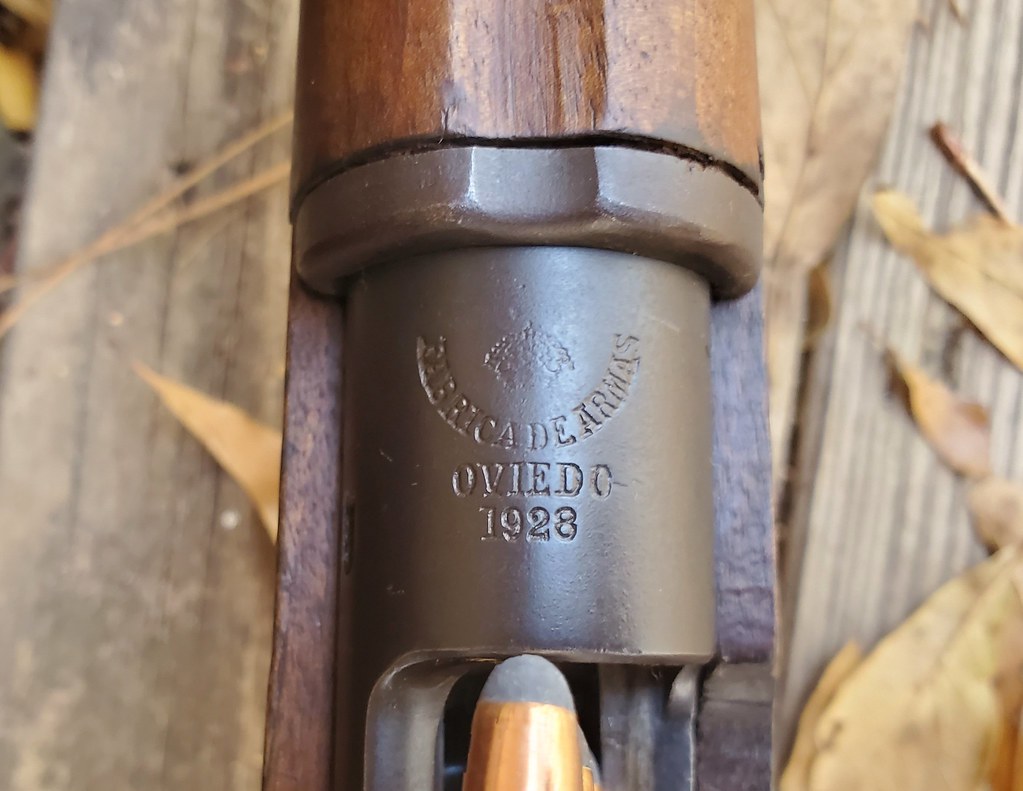 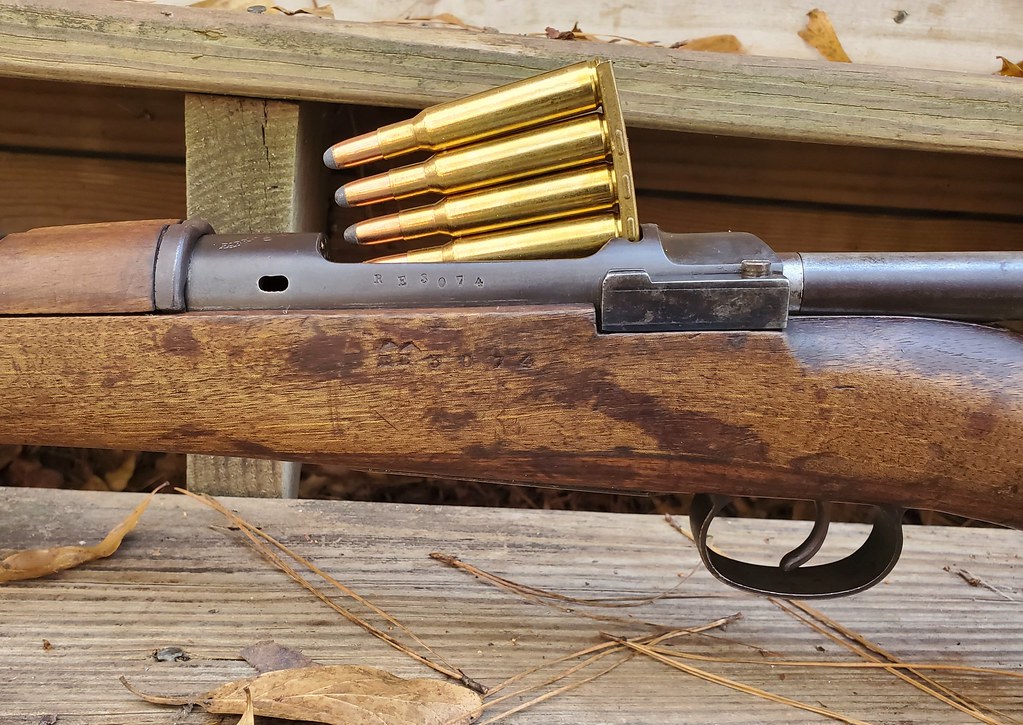 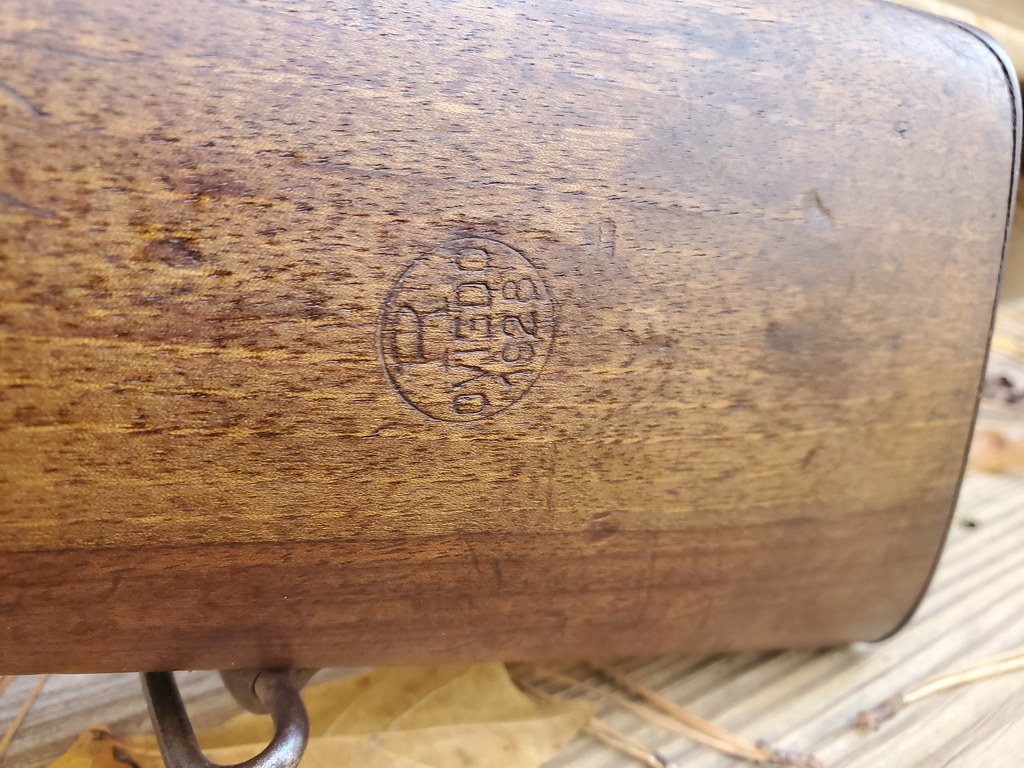 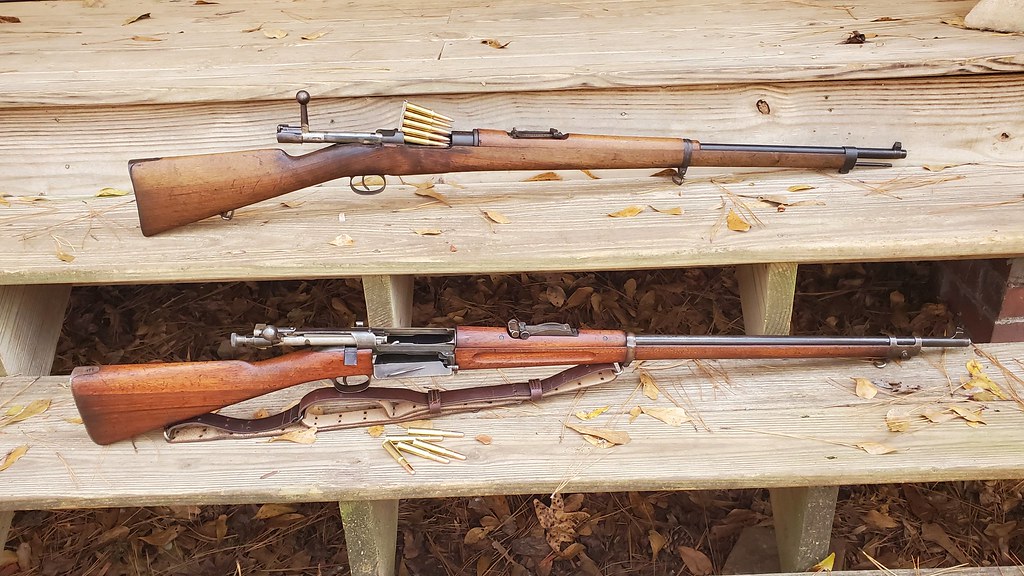 by Knute1
Nice shape Mauser. I have a Model 1916 Mauser built at the same plant in 1921. No where near this good of shape. The Spanish Civil War was unique. How would you like your country fought with Stalin (communist) on one side and Hilter (fascist) on the other?

by butlersrangers
It is nice to see an "Oviedo" Spanish Mauser that is still a 'Long Rifle'.

Some years back, I 'lucked into' a German Ludwig Loewe model 1893, that was restocked in Spain and updated with an Oviedo rear-sight slide. All of the numbers matched including the replacement parts.

The original barrel has a 'minty' bore'. The front sight blade was broken off, so I replaced it with a Swedish m-1896 Mauser blade. A Chilean Mauser rear-sight slide replaced the Oviedo.

The Spanish Royal Crest on the receiver is so faint the date cannot be read, but, has to be 1894.

I have no intention of deceiving. The 'sight change' just improves visibility. (I keep the original Spanish sights with the rifle).

by todd444
i have two 93 spanish oviedo mausers(late 1920s) that were "bubba"ed up. i am going to make a sporter rifle out of them. the first one will be a 7x57 and the second one a 257 roberts. the first one, my gunsmith has bent the bolt handle, d&t for the scope mounts, 2 position safety and replaced a cocking piece and striker spring. i put on a dayton trigger.
i have a richards microfit wolverine gunstock that i have to sand and finish. it will be a douglas or green mountain barrels. when i complete it, the rifle will be given to my youngest son.

by Knute1
I have a M1916 Spanish Mauser in 7x57 built at the Oviedo plant in 1921 according to the serial number. It has not been sporterized and has the original barrel length of 21-3/4". It is all beat to crap, but retains a very good bore. The top of the rear sight is worn so badly that the graduation numbers are gone. I suspect that the rifle spent a lot of time in a scabbard bouncing around on a horse to have smoothly wore the numbers off. The graduations on the sides of the rear sight are still visible. Filed the notch deeper as it was not very visible, the gun shoots high anyway.
The crest and factory name was ground off the top of the receiver. The importer, Samco, stencilled the front underside of the barrel with their name and the Oviedo name along with M1916.
The serial numbers on the trigger frame and floorplate match, being "666", but do not match the serial number on the receiver. It appears that somebody tried to obliterate these numbers, for a reason I can suspect, with a hammer and they were not very successful in their attempt. I had to obtain a cleaning rod, which was the only thing missing. (The cleaning rod passes thru the barrel bands and keeps them aligned.) The stock took a lot of cleaning with mineral spirits to get the crud off. The exterior metal parts were covered with rust, but cleaned up fairly well.
It does still fire, but I have not found out what kind of accuracy it has. I can imagine that it was used during the Spanish Civil War.
I don't know if I really want to know the history of this rifle as it probably isn't a very pleasant one.